Things keep turning up in boxes and filing cabinets. Documentation, memorabilia, outdated videotape formats from published or half finished projects.  –  Slowly.. I digitize them and will present some here. Along with anything interesting in my past practice that catches my attention.
No plan. ..Really !

INTELLIGENCE IN SWARMS
There are interesting and transferable patterns in the fluid behavior in the murmurations of flocking birds. Produced entirely by deterministic rules. Read more

EVERYTHING IS ABOUT SOMETHING ELSE

Communicating via “pictograms”  –  Representational pictorial drawings designed to communicate, in a concise manner, a concept to people who speak different languages or are travelling at speed. –  Simple, recognisable, singular meaning. Read more

A PRINCIPLE OF LOCALITY

My studio windows face the track of the T-bane (Oslo public transport).
For about one hour in the early morning and in the early evening, monday to friday, 6. to 28. of January 2018, I projected a new animation-loop onto transparent screens in these windows. . Read more

Two week exhibit. One week working on finishing a set of large canvases in the gallery space. Then a vernissage for about 1 hour, followed by one week of exhibiting the back of the canvases, the image-side facing the wall. Much to the confusion of visitors to the gallery. Read more

Another piece from the early 90’s, where I tried to combine two projects that I was keen on at the time. Read more

Woke up this morning thinking on the wording in the invitation to my first one-man show, at the “Gallery 7”, June 1977.  The gallery was situated in the foyer of the, then, amazing  Club 7 in Oslo. Read More

My debut in a national exhibition. In the autumn that year I was in Indonesia for two months and just managed to see the exhibition for about an hour on the last day before it closed.
Read more

Another early project ..half a lifetime later. (1985). Relieving standard household objects from their bindings or conventions. Dreaming up other stories :  Photographers gallery, Oslo

A sitespecific piece for a group-exhibit at the Dikemark psychiatric hospital, just outside Oslo 2016. Based on an appropriated image of some active Norwegian art-photographers (around 1987 I think) Read more

On a vista of land, sea and sky, animated symbols and images floats across 4 screens. My first exhibition with moving images. At the “Fotografia”-Gallery,  Oslo 1999. A significant departure for me.
Read more

The Rocket Machine was built in the mid 90’s to show twin film-loops. Loops from “The Sea”, “Approximately Infinite”, “4” and others. The name alluded to a more naive or optimistic period in the development of technology. Read more

My father passed away in 2002  He was a musician. A trumpet player who had a few radio-hits in the 50’s. “Mr. Wonderful” was one of these.   A cousin had them digitized from the old (Triola) 45’s   Read more

The project was based on the Norwegian author Olav Duun’s very last book “Floodtide of fate” (Menneske og maktene) published 1938. The book was written and published in a turbulent time for the world. The climax of the book is the flooding of a small community on an island off the west coast of Norway. Read more

A live projection april 26, 27, and 28. – 2007 in the Astra Gallery, Gernika. It was performed on a white box, the exact size of Picassos “Guernica”, now in Museo Reina Sofía in Madrid.

The youth of Gernika had reclaimed the vacated, former Unceta weapons factory, one of the few buildings that along with a strategically important bridge, was left unscathed in the 1937 bombings, and made it into a cultural centre. Read more

A 24 hour projection of about 20  twin loops. Presented in a random sequence on the newly installed digital projector at the Norwegian Film Institute in Oslo. From Saturday 12.00 to Sunday 12.00, October 2002. The syncronised twin loops were part of the Ultima festival:  www.ultima.no  that year.  Read more 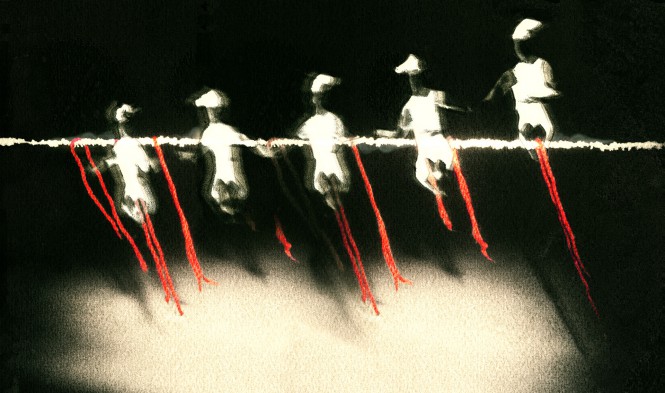 THERE MUST BE ANOTHER..

In the wake of digital distribution and projection of cinema film, new possibilities emerged for artists to intervene in a space that has, over the many decades, been designed and developed to give the optimal experience of  projected images and electro-acoustic sound.
Read more

I was commissioned to make a series of pictures on the Norwegian Chamber Orchestra in 1989.   Read more

Thinking I had spotted a new arena for artists, I spent the first decade of this century focusing on the possibilities of live performed projection on the new digital cinema-projectors that were being installed in cinema halls. I tried to set up group efforts in Poetic film-experiences, edited live via MIDI-controllers in front of an audience.  Read more

Investigating the smallest imprint needed in an artistic practice.( ..this page is in Norwegian. LHK has only been visible to a very few in the region where I live ) In the next project TRAIN PASSING .. DOG RUNNING, the same images are slowly revealed and accessible through my webpage, Facebook, Instagram etc. From the 15. of January 2021.

A friend sent me this picture. It’s a poster from an event by the daily newspaper Uusi Suomi in Helsinki 1991. They had aquired board space in central Helsinki for this street exhibition.

The posters and a two page spread in the paper were made by a selected artist from each of the Nordic countries.
Read More

I am much intrigued by artist run gallery-spaces. I was never a part of this scene. Over the last few years however, I have been turning a former garage in my courtyard into a gallery to present and to communicate the LHK-project. Our house is at no. 144.  This gave the name. Read more